Training Pyramid with a Strong Base

Whatever your goal is - overhead squat your body weight, get out of bed pain free, run a mile in under 9 minutes, or being physically able to live your life independently – nutrition is key. You can be the strongest person at the box, deadlifting 900 pounds, but if you have poor nutrition, you’re diminishing your overall fitness. Below is the “Theoretical Hierarchy of Development” that was introduced to me at my Level 1 Certification. Note the strong foundation of this pyramid is nutrition. It was also stated at my Level 1 that nutrition can account for up to 50% of an athlete’s development. 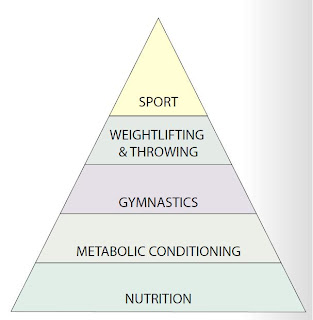 “A theoretical hierarchy exists for the development of an athlete. It starts with nutrition and moves to metabolic conditioning, gymnastics, weightlifting, and finally sport. This hierarchy largely reflects foundational dependence, skill, and to some degree, time ordering of development. The logical flow is from molecular foundations, cardiovascular sufficiency, body control, external object control, and ultimately mastery and application. This model has greatest utility in analyzing athletes’ shortcomings or difficulties. We don’t deliberately order these components but nature will. If you have a deficiency at any level of “the pyramid” the components above will suffer.” (CrossFit Training Guide, “What is Fitness?”; http://library.crossfit.com/free/pdf/CFJ-trial.pdf).
So why have you been torturing yourself for over a week now by eliminating the perceived joy that crack (AKA: junk food or sugar) used to bring to your life? Because you MUST build a strong nutrition base in order to meet your goals in life, whatever they may be, and to develop as an athlete. It is difficult, you’re hurting, but you’re almost over the hump. So…. suck it up, blast some hip-hop, grind out that WOD, and I promise you that going Paleo will equate to your performance at the box improving and your performance in life improving. Stay strong, people, keep eating like a caveman!
Posted by Caroline at 4:11 PM No comments:

My world is very black and white - things are either good for you or they aren’t. Rap Music = good; Heavy Metal (and now, Yani) = bad. CrossFit = good; Long Slow Distance = bad. Meat & Veggies = good; Sugar, Wheat, and Dairy = bad.
Kitsap CrossFit launched its first Paleo Challenge in January 2010. After years of paying attention to what I ate (I thought I was eating decent/healthy meals.) and occasionally indulging in a little post workout ice cream (I mean, when you spend an hour and a half in a freakin’ globo-gym, you’ve earned some ice cream. Right?), I decided to follow the preaching’s of Amy and Dan. I decided to go Paleo. My husband decided to give it a try too and together we went 100% strict Paleo around December 15, 2009 (we were ready, no waiting around till the New Year’s Day!).
The first few days were great and then it got hard. Really hard. On day four, I was so grouchy and cranky that the only way to put me out of my misery was to go to bed. So that’s what I did. I went to sleep at 5:00 pm. Yeap, 5:00 pm! My body was hitting rock bottom as it came off the “crack” (That’s what we Paleo peeps call sugar.). My performance at the box declined a bit and I just didn’t feel “right” for about 2 weeks. Once the initial two weeks were over, something miraculous happened; I began to sleep at night. Not just lying down at night to toss and turn and dread getting out of bed in the morning. I really SLEPT. Then I began to wake up before my alarm clock was set to go off. I was actually READY to get up, get out of bed, and start my day. I felt like a rock star! My husband noticed the same effect but in addition, as the weeks went by, he wasn’t getting migraine headaches anymore. He also wasn’t suffering from the acid reflux/indigestion that had plagued him for as long as I’ve known him. In three short weeks, going Paleo had wiped out the need for us to buy medication for his ailments.
After a month or so, another effect of the Paleo Diet hit us… NONE of our clothes fit. Nada. Zip. Zilch. We began dropping weight pretty quickly all while eating if/when we were hungry, as long as it was Paleo. Since December 2009, Steven has lost ~15 lbs (although very slender to begin with) and I’ve lost ~25 lbs and I continue to steadily lose more with every month that goes by. With hard work in the box (like all of us currently do!) and a Paleo diet, the weight just keeps falling off of me. While the health benefits to my family far out weight (pun intended  J) the weight loss, it does feel great to look better too (Remember back to your Intro when Dan said that an unintentional side effect of this training is that you will look better naked – it’s true!)!
This Paleo Challenge started as a 30 day experiment that is still going - we are about 10 months into our “30 Day Paleo Challenge”. For us, this is a permanent lifestyle change that has had amazing effects on our overall health (I’ll always be grateful to Amy and Dan for making our family healthy and my husband migraine free!). I encourage each of you to give it a shot. At the end of the challenge, if you didn’t like it, you’re welcome to go back to your old eating habits. You have no idea how good you can feel, unless you try it. I urge you to feel better, look better, and sleep better! It’s a black and white decision; you’ve got nothing to lose (except a few pounds!). 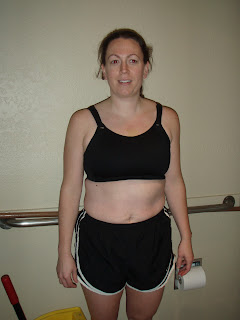 Me After Paleo (after roughly 9 months of strict Paleo): 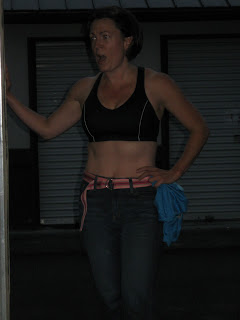 Posted by Caroline at 4:06 PM No comments: