Brooke... Brooke... Brooke.. She was craving peanut butter pie. Not a homemade recipe from a cherished family member but store bought, nasty, sugar packed, coma inducing peanut butter pie. Before she indulged, she posted on FaceBook to ask her friends if she should have it or not. As you can imagine, I jumped on it and told her "No". Brooke is in the box every day working hard and the last thing she needs is to feel awful and derail her training with nasty pie. In a last minute effort to steer her towards the good light of Paleo, I told her that if she stayed away from the pie, I'd make her a kick ass Paleo treat and that she wouldn't regret giving up the pie. I went right for the big guns... chocolate. 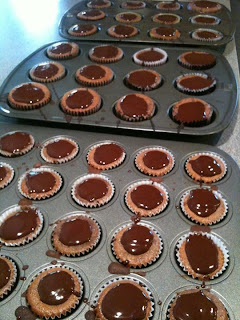 This is an Elana's Pantry recipe for her chocolate cake. I did substitute honey for the agave. Since I was taking it to the box, I decided to make cupcakes instead... just easier that way. And guess what? 100% Paleo, yo!
Posted by Caroline at 4:13 PM No comments:

Wow, is there anything better than FGB? Not the WOD but the event. It is truly an amazing time which brings athletes of all levels, skills, and abilities into the same arena to do the same WOD. Nobody cares if you're doing it prescribed, they only care that you show up and do the work. It takes a special group of people to give it their all for 17 minutes (that's a long time, folks!) to raise money and support families of complete strangers.

This year's event was awesome. Partly due to all of the other boxes which showed up to participate right along with us and partly due to an unexpected visitor, Lauriel Luther. For those of you who don't know Lauriel, you can follow her story here. Lauriel lives in Arizona but her parents live near us on the Olympic Peninsula in Washington. Whenever she comes home, she always comes to visit us too and get her WOD on with her extended CrossFit family at Kistap CrossFit. Years ago when I met Lauriel for the first time, she was a Paleo inspiration to me. She was strict Paleo - all the time. At that point in my life, I was about a month into my Paleo journey and she was an inspiration  to keep my diet clean. She was lean, she was strong, and I wanted to be just like her.

Lauriel's first visit home since having surgery was the same weekend as FGB6. I saw her in the box on Thursday and asked if she was going to do FGB. She looked at me like I was crazy and said that she hadn't even thought about it. After about a minute of thinking, she replied, "Yes. I think I can do that." Did I mention that she's an inspiration?!?!? The plan was that she would use a light weight (PVC pipe if she had to) and she would do step-ups instead of box jumps. If the first round felt good, she'd rest for the second round, and then jump back in for the third round. When the time came, in true Lauriel fashion, she did the entire WOD (all three rounds!) with a 33# barbell and box jumps!

I've never been so proud, so humbled, and so honored in my entire life. Here is this woman who just underwent brain surgery, is currently receiving chemo and radiation, and she just completed FGB6?!?! I have been praying for Lauriel for months and it was an amazing privilege to see how God answers prayers. Truly a miracle took place right in front of my eyes at FGB6... then again, it was Lauriel and she was my inspiration for years by being strong. Today it wasn't just physically strong but also mentally and spiritually strong. My strong friend not only participated, she crushed it.

Our box ended up raising over $8,000 that day for the Special Operations Warrior Foundation, CrossFit Kids, and Camp Patriot. It was an amazing day full of inspiration, strength (all forms), and love. 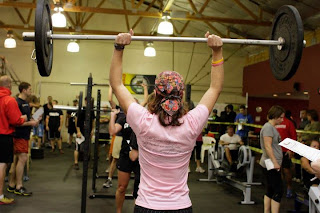 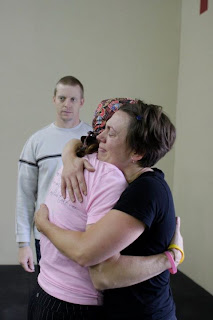 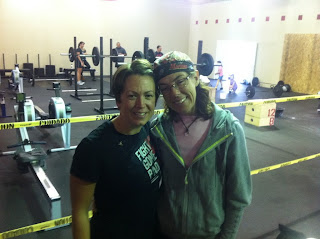